On Saturday September 28, Churches Together London and Hillside Church hosted Marcel Lebrun, creator of the 12 Neighbors video series. He challenged the audience of almost 70 people to “spend themselves” in order to act and think differently about how to love one’s neighbor. The context for this challenge was based on Isaiah 58: 10 to 11: “If you spend yourselves in behalf of the hungry, and satisfy the needs of the oppressed, then your light will rise in the darkness, and your night will become like the noonday.”

Marcel shared his own spiritual journey towards discovering the meaning of this scripture. In university, he pursued goals that brought him success, but left him disillusioned. In his first year of university he came to Christ, through the organization Navigators, and also met his future wife, Sheila. After graduation, he combined his training in engineering and entrepreneurship with the goal of being a “kingdom worker” in the world. In 2015, he left his successful marketing and technology company and waited on God to lead him.

As the starting point for his journey, Marcel looked at a variety of ways to try to help people in need and found that they often created unintended damage. Resources such as When Helping Hurts by Steve Corbett and Brian Fikkert, and the video Poverty Inc confronted him with the fact that many attempts to help are ineffective, and rob people of their dignity. For example, in Uganda, a country where many adults had dies of AIDS, orphanages were set up by North American agencies. It was discovered that, in some cases, families were pushing out their children in hopes of giving them a more financially secure life in the institution. But this robbed the children of their emotional connections with their families and gave inadvertent power to those running the orphanage. Another example occurred after the 2010 earthquake in Haiti, when huge rice donations were contributed by foreign aid organizations. The agencies ignored the local rice-growers as a source and, in so doing, destroyed the agricultural infrastructure.

Marcel was drawn to learn more about effective and sustainable community transformation, which led him to create the 12 Neighbors video series. The story segments are filmed in locations in Canada, United States and Africa. The projects shown range from a former drug dealer assisting marginalized people to find work, a ministry to children growing up without a father, a church group in New Brunswick teaching English to Syrian refugees, and HomeBoy Industries in Los Angeles finding jobs for former gang members. This free online resource is now being used by over 100 churches in North America. The usual format is an 8-week program showing one or two stories each week, followed by discussion. Stories show a mix of faith-based and secular initiatives, and provides both a Biblical and a secular discussion guide, because Marcel realized that “the intersection point of loving our neighbour is a universal intersection point.”

Many of us want to help marginalized people, but don’t know where to begin. Marcel described the “circle of compassion” of family members and close friends in which we all live, a term first coined by Albert Einstein. Marcel’s challenge was for us to expand our circle of compassion. 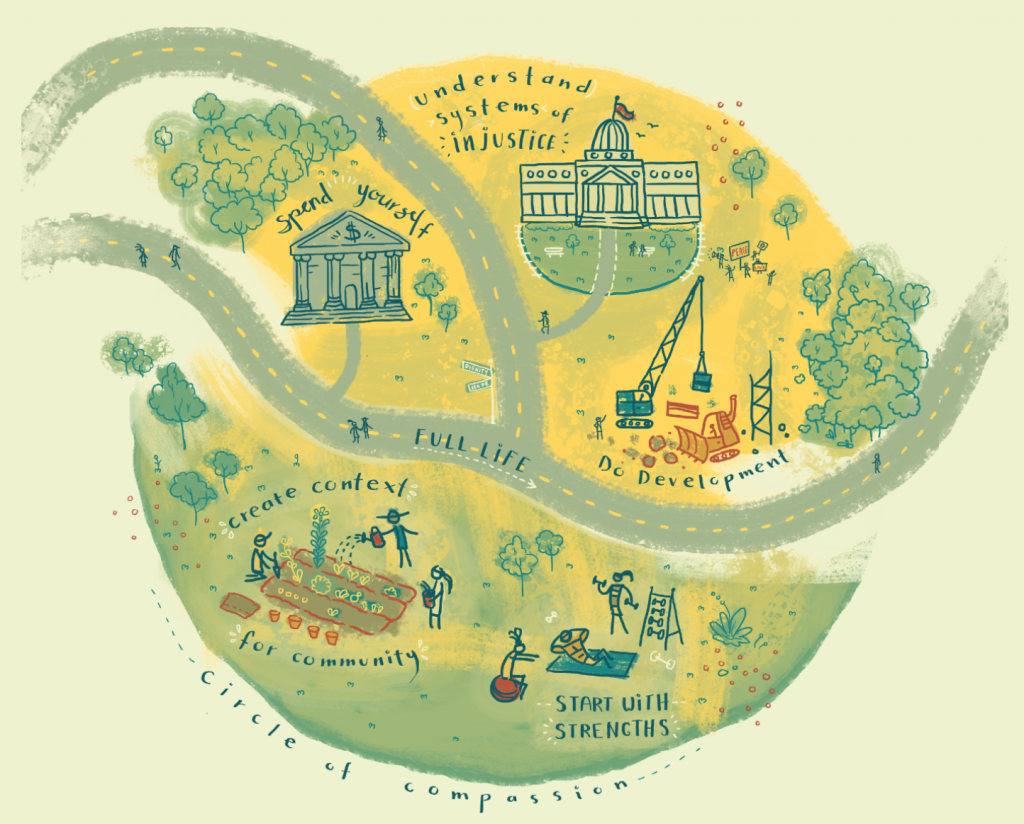 The simple diagram above (copyright 12 Neighbors) illustrates some of the significant principles leading to community transformation that are brought out in the 12 Neighbors video series.

Marcel emphasized three practical lessons that are a good place to start:

1. People who have an impact make a habit of showing up in places of brokenness.
2. Listen to people’s stories, without thinking you have to solve all their problems.
3. Cherish each individual. Many people are so broken that they are convinced there is no hope for them. We need to watch for, and call out, the Imago Dei – the image of God – within them.

Pastor WIllemina Zwart moderated a panel discussion with Marcel Lebrun, and pastors Beth Fellinger, David Cottrill and Jared Both. In response to the question ”How have the marginalized affected you?” Beth commented that “People on the margins do relationships better. Learn to be a guest at their table and surprising relationships develop.” David realized that the marginalized are seldom given the opportunity to use their spiritual gifts, and there was a need to start a church where they could contribute in this way. Jared said that churches are uniquely positioned to sponsor refugees, and many refugee families need friends more than financial support.

Marcel’s goal is to create a movement of people inspired and educated to love their neighbour. His hope is that we will each take up the challenge of exploring the 12 Neighbours video series and study guide with our different church communities.

To learn more about the movement and view the videos please refer to www.12neighbors.org 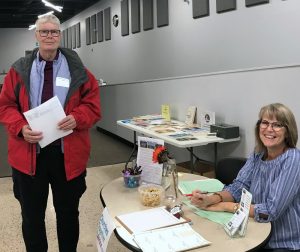 Our September event will feature Marcel Lebrun, the founder of The 12 Neighbors Project, which asks the most important question of our time: “What does it really mean to love your neighbour?“ Understanding neighbourhoods is a passion project for Marcel. He got involved by trying various ways of helping out in his community, learning about… END_OF_DOCUMENT_TOKEN_TO_BE_REPLACED

On November 27th we held an event to share insights from the CCDA conference in Chicago, and to hear how Londoners are connecting into community development. The theme of the evening was Would Our Neighbourhood Notice? “If our church disappeared today, would our neighbourhood notice?” This provocative question, perhaps more than any other, linked together… END_OF_DOCUMENT_TOKEN_TO_BE_REPLACED

The 30th annual CCDA conference takes place in Chicago November 1st to 3rd. Its theme of Rooted reflects a deep faith in God and a commitment to persevere in hope. The London area has sent many conference-goers, who are eager to share and reflect on what they have seen, heard and experienced in Chicago. It… END_OF_DOCUMENT_TOKEN_TO_BE_REPLACED

This November 1st to 3rd, the annual CCDA conference is being held in Chicago. Similar to last year’s Detroit conference, Londoners have a great opportunity to drive to the Christian Community Development conference. It will be an amazing and inspiring event! CCDA is a network of Christians committed to seeing people and communities wholistically restored.… END_OF_DOCUMENT_TOKEN_TO_BE_REPLACED

Our Stories of Hope event was a great success, with 60 people hearing about community development challenges and successes in London. We were encouraged to live a life beyond ourselves, and to not be fooled by how someone looks. The latest sets of refugees arriving here have come through truly awful experiences, some as recently… END_OF_DOCUMENT_TOKEN_TO_BE_REPLACED

Stories of Hope through Community Development in London   You were invited to join us on Thursday evening, April 26th for 90 minutes of local, lived experience.   The fast-paced TED talk format provided 8 inspiring stories of struggles and successes in our communities – illustrating wholistic principles of community involvement based on authentic, reciprocal relationships. … END_OF_DOCUMENT_TOKEN_TO_BE_REPLACED

The CCDA conference was held in October in the Renaissance Center in downtown Detroit. That made it easier for many Canadians for make the trip. It was clear that the US is struggling with many harsh undercurrents relating to immigration, social justice, minority discrimination and concerns about further political challenges and upheavals. But there were… END_OF_DOCUMENT_TOKEN_TO_BE_REPLACED

Each year a major community development conference takes place, often out of reach for the London area. But this year, the CCDA conference is in Detroit – just 2 hours down the road. It will be 3 days of witnessing best practices in Christian Community Development, networking with ministry leaders, and being inspired by hands-on,… END_OF_DOCUMENT_TOKEN_TO_BE_REPLACED

Each year the Christian Community Development Association (CCDA) holds a major conference, attended by 3,000 people from across the world. For the latest conference, 16 Londoners traveled to Memphis to experience and share new ways to help in our communities. The group got together at the Navigators’ office recently to talk about the CCDA conference,… END_OF_DOCUMENT_TOKEN_TO_BE_REPLACED